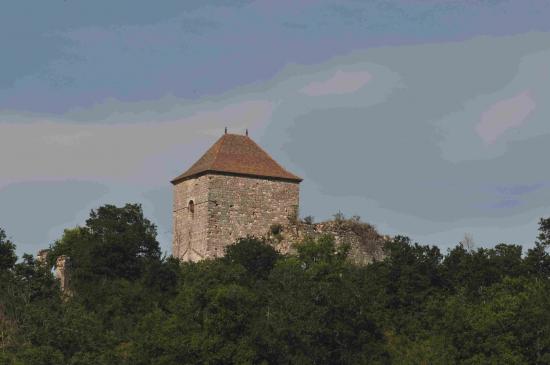 The placename Roquefort bears witness to a former military usage. “Roque” means a fortified place, and “fort” means “strong”, and so we could translate Roquefort as the “strong fort” (in French, “fort fort”), or strong château.

This château, still in existence, was constructed in the 13th or early 14th century. It was partly dismantled during the 100 Years’ War. It was in ruins in 1562, when Jeanne d’Albret gave it to the De Secondat family. The family, which rebuilt it during the tumult of the Wars of Religion, retained the château until the end of the 18th century. The château has retained its tower hall, the bulk of its walls, and buildings which were re-used during the neo-classical era.

The villa of Sourdignan, dating from Gallo-Roman times, seems to have been built on a large scale and equipped with every luxury, notably with thermae (heating, hot baths).

In the late 16th century Henri IV, travelling on the old Roman road, stopped over at Roquefort on his way to the château of Nérac. In 1803 Napoleon decided to construct a road from Demi-Lune to Falmont, as replacement for the Roman road (this is now the D656).

Every Tuesday morning, up until the 19th century, a cattle market was held in the village square in the shade of the elm trees. The elms were decimated by graphiose (Dutch elm disease) and in 1903 they were replaced by 86 plane trees.

In this small commune the legend of Françounette originated. The celebrated Agenais poet Jasmin, who worked in the Occitan language, wrote a poem about this young woman of the 17th century who was believed to be a witch. It is a tale that mingles mystical forces with a love story.

The village is situated on the St James of compostella route, the GR 652.

(Route shared with the Cluniac walk between Moirax and Agen).